Paddling the Missouri River is usually easier and safer than most people think. But there are still serious hazards to consider. On the Big Muddy, a few mistakes can turn a peaceful float into a very wet and dangerous situation. It’s a wide river and the current is deceptively swift & strong.

Everyone with cell phones should save these numbers on their phones in case of questions or emergency:

Wear your lifejacket at all times in the race! Alcohol is not permitted in this race.

If you should capsize on the river – RELAX and float first and grab ahold of your boat. Let your PFD float you as you regain calm. Do not attempt to swim upstream or against the current. Attempting to fight the current will only kick in your panic reflex, not to mention it is impossible. Once you get an idea of where the current is going, you can attempt to hold onto your boat, grab your paddle and move slowly to shore following the current. As soon as you are in a safe situation, call one of the numbers above and a support boat will come pick you up as soon as they can get to you.

ALSO – we need all of you to be safety boats for each other. If you see someone capsize or have trouble, please help and contact the safety crew.

The river is projected to be about 5 feet on the Jefferson City gage for the race. At this level, most wing dikes and obstructions are out of the water, but the ends of some dikes are still underwater. You may encounter shallow water where you don’t expect it.

Perche Creek is really low. We recommend that competing boats that are behind yield to the lead boat. You'll still have 26 miles to catch up!

If you see a fellow paddler in trouble, please offer assistance if possible and call one of the numbers above to advise on location. We are all safety boats out there.

Here are some specific hazards to look out for on the Missouri River:

Wing Dikes
These are the rock structures that jut out into the current. At this level, most wing dikes and obstructions are visible and out of the water, but the ends of some dikes are still underwater. There are some “trailing dikes” parallel to shore on the channel side where you don’t expect them. We recommend you avoid wing dikes as the water around and just downstream of wing dikes tends to have swirling currents that will slow you down and may tip an unstable boat. A rule of thumb is to stay in the middle of the river and toward the outside of the bends and the dikes shouldn’t give you trouble. Never approach any obstruction from upstream as the current can trap you against it.

Buoys
Navigation buoys are large metal red or green floats anchored to the river bottom. Give navigation buoys plenty of room. They are known to bounce around and a few are floating just at river level and may pop up and down. Stay aware of what is ahead of you!

Barges
There are very few barges that operate on the Missouri River, but it is possible barges will be moving during the race. We will attempt to find out the latest info on barge placement before the race.

If a barge does come along, it’s best to get out of the main navigation channel (that’s where the barges will be and where the waves will be strongest) and point your bow into the wake it leaves behind. A general rule of thumb is that the navigation channel is on the outside of bends, but it also crosses at each bend. The worst place to be is between a barge and a riprap shore where the waves can push you against the rocks. Barges have almost no ability to turn; it’s your job to get out of their way.

You will pass sand dredges moored in the river just outside the main channel. The dredges are anchored to cables that stretch out on either side. Give dredges and other tied up barges plenty of space and do not approach them from the upstream end.

Boats
Make sure you’re visible to local recreational boats. Turning sideways to the current makes a bigger display. Point your bow into the wake the boat leaves behind. Wave a paddle above your head if you don’t think you’re visible.

Current
The current is deceptively strong on the Missouri. It can catch you off-guard and make a tippy canoe into a tipped-over canoe pretty quickly. Keep your center of gravity low and weight balanced evenly across the canoe. If you need to land on shore, approach your landing from downstream, paddling upstream to your landing spot.

Wind
If your canoe is perpendicular to the current and you get caught by a strong crosswind, the canoe will tip easier.Headwinds can be exhausting and you may want to consider where on the river you can escape the wind as you move downstream. Of course every time you go around another bend it all changes.

Silver Carp
You may encounter the infamous “Flying Carp”, an invasive species that has invaded our big rivers. They tend to be in backwater, such as Perche Creek, in the few feet next to the bank, or behind wing dikes, including where the current of the main channel pushes against the wing dike eddy. You probably won’t see them jumping in the main channel unless you are fairly close to the bank. They can jump as high as 8 feet. Protect your face and head if you can. They can weigh 50 pounds or more.

This is a good reason to stay a reasonable distance from the bank when paddling downstream. We recommend 50 or more feet.

Fog
There is a chance there will be fog at the start of the race. If there is substantial fog, we will delay the start of the race in 15 minute increments until it clears. If you should encounter a thick fog bank during the race, it is recommended that you pull over and wait for it to clear. Fog is extremely disorienting, and there is nothing to say there won’t be a motor boat or barge headed upstream at you in the fog.

Weather
The forecast high for the race is a high of 77 degrees. The low Friday night is 47. Water temperature is in the low 70’s, which is cold enough to cause hypothermia if you are exposed to it for any length of time. Currently no chance of rain. If there is lightning/thunder at the beginning of the race, the race will be delayed in 30-minute increments. If there is lightning when the race is underway we request that you pull over and wait out the storm.

Regardless of the weather, it can feel colder on the river so having an extra dry bag with dry clothes and rain gear is a good idea in case you tip over or it rains.

Finding the swiftest water
One of the keys to your success in finishing this race will be finding the swiftest water. The Missouri River we have today was created by the Army Corps of Engineers by channelizing the much wider, more unpredictable historic Missouri River. Because of that engineering and the navigation markers maintained by the US Coast Guard, the channel is fairly easy to predict.

We suggest staying toward the outside of the bends, about 50 or more feet from shore. You’ll save energy and time by crossing the river to stay with the current rather than attempting to hug one particular bank. The water between and surrounding wing dikes, which are mostly on the inside of bends, tends to have eddies and turbulence which will slow you down. There may be patches of faster water at the tips of wing dikes, but they are often followed by slower eddies.

It can help some paddlers to think of the Missouri River as a five-lane highway, where you want to stay in either lanes 2-3 or 3-4 depending how the river bends. Which means if you try to stay in the middle of the river you should be good. Here’s a video by Chris Luedke, designed for MR340 paddlers, that might help you visualize this. 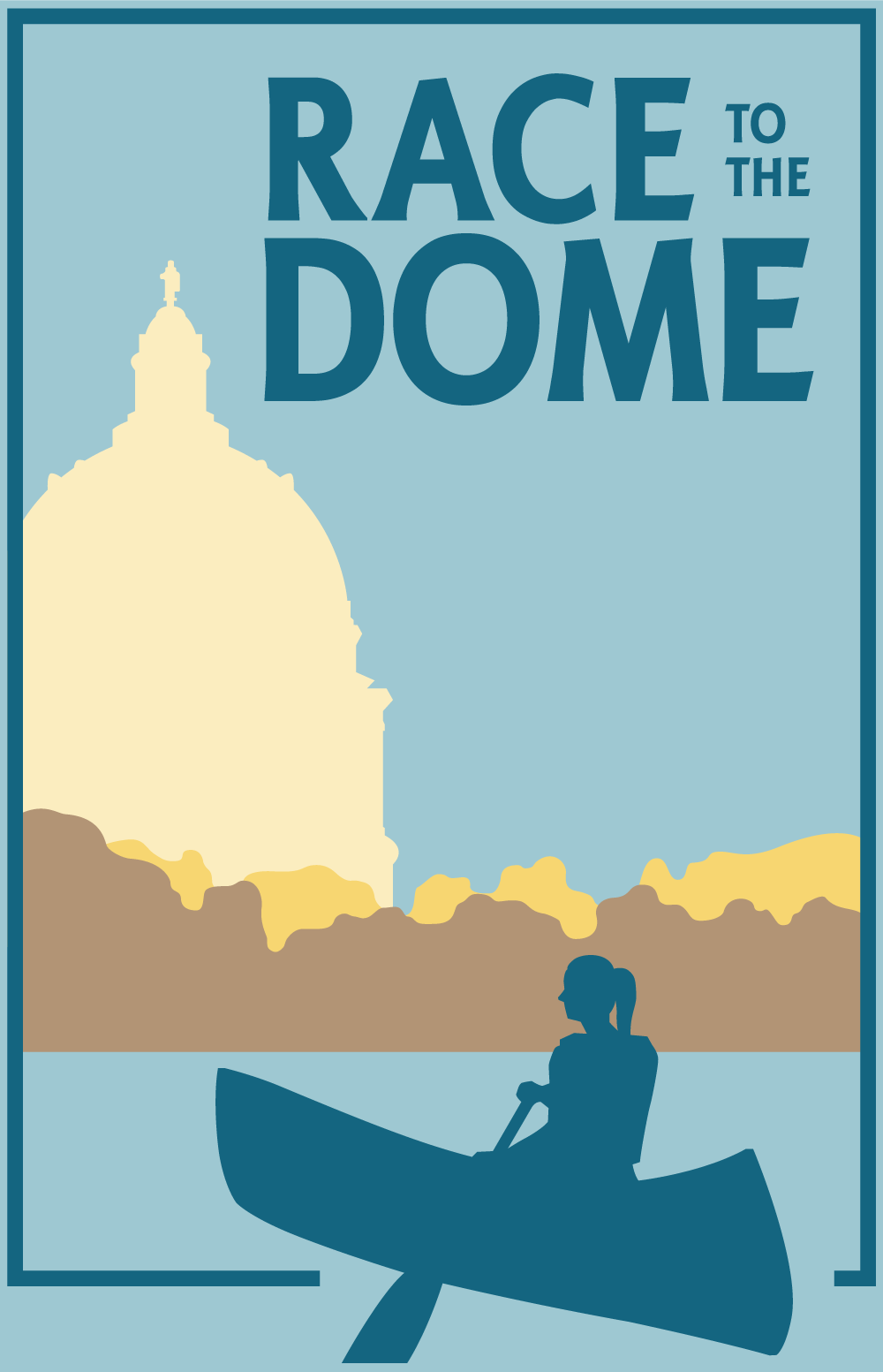 Proceeds from the race support Missouri River Relief's efforts to connect people to the Missouri River through hands-on river clean-ups, education and recreation.
P.O. Box 463 Columbia, Missouri 65205
(573) 443-0292
​racetothedome@gmail.com
© Missouri River Relief | Website development and design by Pixel Jam Digital
Manage Cookie Consent
To provide the best experiences, we use technologies like cookies to store and/or access device information. Consenting to these technologies will allow us to process data such as browsing behavior or unique IDs on this site. Not consenting or withdrawing consent, may adversely affect certain features and functions.
Manage options Manage services Manage vendors Read more about these purposes
View preferences
{title} {title} {title}